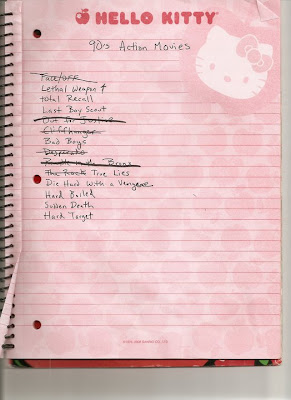 Week 1 - Face/Off
holds up. Funny, fast-paced, and with amazingly staged and executed action scenes. It's also too long, but the performances keep it going. I give it 8 explosions out of 10.
Week 2 - Out For Justice
featuring Steven Seagal, William Forsythe, and Jerry Orbach.Hilarious, with some dull spots and lots and lots of cliche. Too weird and funny and violent to even accurately rate. Not good at all, but not bad at all either. I give it 6 out of 10 random murders.
Week 3 - Rumble in the Bronx
With Jackie Chan-Starts slowly, then just rolls right along pretty nonstop for a good hour. Jackie Chan is amazing, even after seeing this movie many, many times, I was still gasping and laughing at the ridiculous stuntwork. Definitely worth a re-watch. I give it 8 out of 10 hovercrafts.
Week 4 - Desperado
Starring Antonio Banderas, Salma Hayek, and many others. Not as good as you remember it being. LOTS of down spots, and can't seem to make up it's mind whether it wants to be an arthouse film or a dumb action movie. Some good parts, but the action scenes blur together and the jokey stuff just isn't funny e...nough. Steve Buscemi is awesome as usual, I give it 5 out of 10 piss-warm chongos.
Week 5 - Cliffhanger
Starring Sylvester Stallone, John Lithgow, and the dad from Mallrats. Incredible, top-notch stunts. After something like 15 minutes of setup, turns into nonstop action and peril for the next hour or so. Well thought-out scenes buckle a bit under TERRIBLE dialogue, like as bad as Out for Justice in some parts. All in all, I give it 7 out of 10 Lithgows.