Well, it was a long fall from grace from when we started. The fall of 90's action movies ended december 22nd with Sudden Death. Over four months we watched fifteen 90's action flicks. We took the liberty of kicking the lists ass and ranking lots of shit. Also remember that we watch and discuss one night a week, so its not like this is all I do in my life. 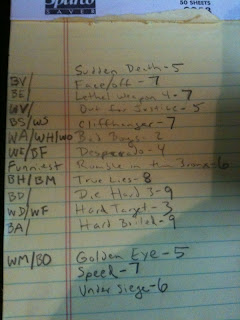