This is part one of Somewhat Obscure Childhood Movies. We watched a lot of movies growing up, Back to the Future, Indiana Jones, E.T., Star Wars, etc.. These are movies of a different caliber if you will. Not bad by any standard...well some are bad, but all I watched many many times as a child. I know some were just rentals and some were taped off of TV. The Disney ones were shown on the Magical World of Disney, which I miss very much. All in all these movies remind me of being a kid. I would like to know if anyone has seen these or even better, what are some of your somewhat obscure childhood movies? 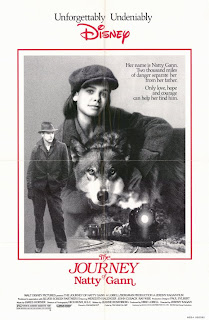 The Journey of Natty Gann is a 1985 American film. Set in 1935, the movie tells the story of a young woman, Natty Gann (Meredith Salenger). Out of work because of Depression-era unemployment, Natty's father (Ray Wise) travels from Chicago to the state of Washington to find work in the timber industry, leaving tomboyish Natty behind. Having no mother, Natty runs away to find her father on her own, embarking on a cross-country journey. Along the way she is befriended by a wolf who travels with her for much of her voyage, has a brief, innocent romance with another young traveler (John Cusack), and encounters various obstacles that test her courage, perseverance, and ingenuity. The wolf-dog, Jed, who portrays the wolf befriended by Natty, later appeared as the title animal in White Fang. He also appeared as the first form taken by the alien creature in The Thing. 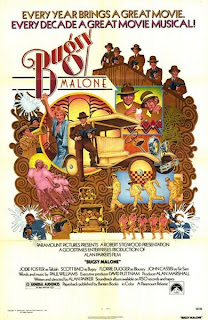 Bugsy Malone is a 1976 musical film, very loosely based on events in New York City in the Prohibition era, specifically the exploits of gangsters like Al Capone and Bugs Moran, as dramatized in cinema. Featuring only children. This film was Parker's feature-length directorial debut and introduced actor Scott Baio as well. It also featured Jodie Foster near the beginning of her transition from television child star to award-winning film actress. Foster was awarded two BAFTAs. The "splurge guns" proved to be problematic. After initial experiments with cream-filled wax balls proved painful, Parker decided to abandon the idea of filming the guns directly. Instead, the guns fired ping-pong balls, and a fast cut to a victim being pelted with "splurge" was used to convey the impression of the rapid-firing guns. 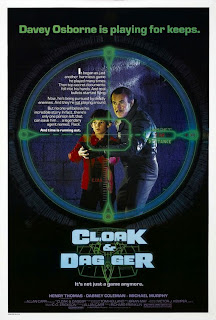 Cloak & Dagger is a 1984 film directed by Richard Franklin starring Henry Thomas, Dabney Coleman and Michael Murphy. It is a remake of the 1949 film The Window. 11-year-old Davey, whose mother is dead and whose father doesn't spend nearly enough time with him. So the boy loses himself in video games--and even has an imaginary friend, a super-resourceful secret agent. When he comes into possession of a spy group's secret plans, and winds up on the run from them, he must learn to rely on himself and his imaginary pal to save his skin. But, in the end, Dad proves to be his real hero. Critical to the movie's plot is an Atari video game called Cloak & Dagger. The game was under development using the title Agent X when the movie producers and Atari learned of each others' projects and decided to cooperate. 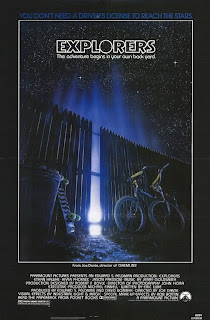 Explorers is a 1985 family-oriented science-fiction fantasy film written by Eric Luke and directed by Joe Dante. It was the first feature film for both River Phoenix and Ethan Hawke.The film did not do well at the box office, owing in large part to being released on the same weekend that the Live Aid concert occurred. It has gained a cult following among fans of Dante's work, as well as science fiction fans and those who feel it is an overall family friendly movie.This film blends some elements of young explorers, as similarly portrayed in films like E.T. and The Goonies with those of classic sci-fi films, as three young friends are drawn into a space fantasy adventure. The film's protagonists are three neighborhood kids, Ben Crandall (Ethan Hawke), Wolfgang Müller (River Phoenix), and Darren Woods (Jason Presson).